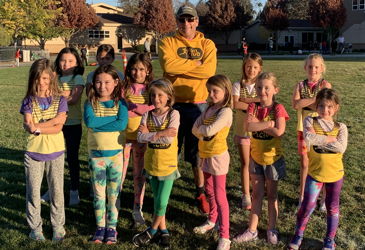 This is the amazing 8 & Unders Girls Run Club Cross-Country team. This team narrowly missed winning its first race of the season at Hayward High School after just 6 weeks of training losing to 5NORTH from Tracy CA by 1 point and just 44 hundredths of a second! They took 2nd again at the 10/30 Soquel/Santa Cruz race to the Oakland Cubs (who they beat at Hayward). They then came back for a re-match at the Run Club Invitational in Menlo Park's Bedwell Bayfront Park course on 11/13 to soundly defeat 5NORTH 24-33 (low score wins in Cross-Country). Emmi was the meet champion at the Soquel & Menlo Park races - at Soquel, she beat last year's Northern CA/Northern NV Junior Olympics champion by 12 seconds. Emmi is also ranked ~7th fastest cross-country runner in the United States (Girls 8 & Unders).

Run Club Menlo Park is a running program for girls (and now boys too!) in 2nd*-8th grades. While our program is non-competitive and we have runners of all levels from first-time beginners to advanced level runners, we are a serious running program for all girls and boys. *Please see our About RCMP pagee for more info on 2nd graders: Click Here.

The First Rule of Run Club: Have Fun! The way to keep kids running is to keep running fun. While we are having fun running, we also teach serious running techniques such as pace, form, endurance, and speed. We weave running games into our workouts (Clue Relay, Sharks & Minnows, Chaos Tag, and more) and include a social-emotional lesson/theme at every practice. This past season, we covered topics such as Teamwork, Respect, Compromise, Empathy, Cooperation, Introspection, Gratitude, Positive Competition, Burden vs. Opportunity, and many more. Is it really that fun? On average over the past three seasons, 89% of runners have returned to run the next season.

We train for 10 weeks (twice a week) and complete a practice 5K and a final 5K. Run Club Menlo Park is also an official USA Track & Field youth running club and there are opportunities through the club to participate in local, regional, and even national competitions. In our Spring and Fall 2022 seasons, we raced in Hayward (XC), Santa Cruz (XC), Oakland (Track), Brisbane (5K), and Menlo Park (XC & 5K).

RCMP has two 10-week seasons, one in the Fall and one in the Spring. Fall Season starts at the end of August and Spring Season starts in the beginning of March. Practices are held at the Encinal Elementary school track & field.

Scott Paterson is the Founder and Head Coach of RCMP, is a parent of a 14 year old girl at Menlo-Atherton high school (freshman girls volleyball team), and has been a Menlo Park resident since 1996.

Coach Scott was a New York State High School Cross-Country Champion (1984) and has set numerous cross-country high school course records across New England including the famed Boston Franklin Park Course record (1985). He was recruited by Vin Lananna (2016 US Olympic Track & Field Head Coach & current President of USA Track & Field) to run for Dartmouth College (NCAA Division I) and ran varsity cross-country and track with a 4:14 best time for the mile and 52:19 for 10 miles (1986-90).

Scott also coached his daughter's middle-school volleyball team (1st place regular season 6th & 8th grades) and is the Founder & CEO of Poverty2Prosperity.org, a non-profit that has funded over 25,000 zero-percent interest loans to the working poor around the world since 2008 with a 99% repayment rate.

What Parents Say About Run Club

My daughters (7th Graders) have run with Coach Scott for the past 8 seasons and went from non-runners to experienced runners who learned about pacing, stretching, training, form, breathing, and teamwork. Best of all, this is a low-key, non-competitive environment where participants improve together, make new friends, and learn how to be better friends through the season, or seasons! This is such a fun activity that supports health, independence, and community.
-Sarah W.

Coach Scott has an unbelievable gift for getting girls excited about running. My daughter had never run before and now loves running and especially competing and can't wait to do Run Club again in the Spring. He seems to know just how much to push them to make it challenging but also so much fun. He also has an amazing ability to make every girl feel important and valued. His dedication and just love for the sport is so obvious to everyone. I am so grateful to have found this club and experience for my daughter; I only wish we had known about it sooner. Scott is a truly special human being and coach and I am so grateful my daughter had a chance to learn from him.
-5th Grader Parent

I love the "Be a Good Friend" practice theme. We initially joined Run Club due to the social emotional component and health benefits of running. We stayed for the amazing coaching. I am so glad you have kept to your roots of training the whole athlete, including the spirit and mind!
-Rebecca M. 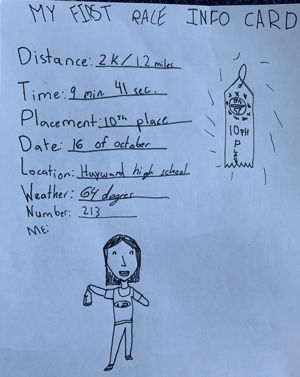 Coach Scott makes running fun for the girls, incorporating social-emotional learning while challenging them, making each girl feel they're an important part of the club. I recommend Run Club to all parents I talk with - even (and maybe especially for) the girls that think they don’t like running!
-Danita G.

This parent let me know that their third grade daughter had said they would not do any races at all at the beginning of her first season. She was running so well at practice, she was one of 11 girls out of 62 that I took to an early race. She is one of only three Run Club girls to place in the top 10 of a USATF Cross-Country race in their very first race. She drew this at home (found by her mom) later that day. 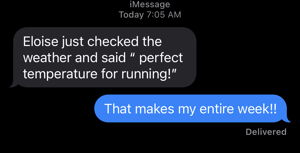 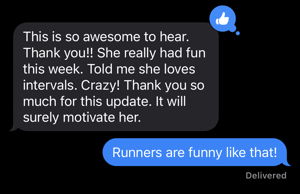 Social-Emotional Theme at Every Practice 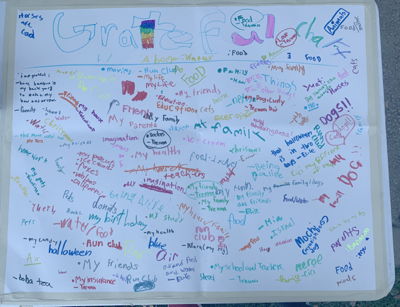 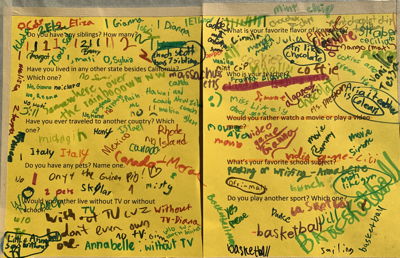 After each set of intervals/laps, the girls would also write down something for which they are grateful or ask a teammate a question to learn more about them.

Get a Glimpse of Our Season and Accomplishments

The Run Club Menlo Park girls have had a lot of fun learning how to run and have an accomplished Cross-Country, Track, and Road Racing results record. 46 girls from 7 different schools (Encinal, Oak Knoll, Laurel, Hillview, Peninsula School, Nativity School, and Addison) just finished the Spring 2022 season: 73 races, 46 new personal records, and 17 top 10 finishes in the 1500 meters at the USA Track & Field Youth Meet at Laney College, Oakland and the Schoolhouse Rocks 5K in Menlo Park. To get a glimpse of our season and running, check out this short 4+ minute video - Joyful "Girl Power" at its best!

We are a federally recognized tax-exempt 501(c)(3) non-profit California corporation. The program fee covers our program costs and hels with scholarships too. We also accept donations which help us to provide partial and full scholarships to kids who would otherwise not be able to afford to participate in our program (~13% of our kids are on scholarship). MPCSD teachers and administration children also receive an automatic 50% scholarship to participate because we appreciate and support teachers and staff very much! Donations are tax-deductible.